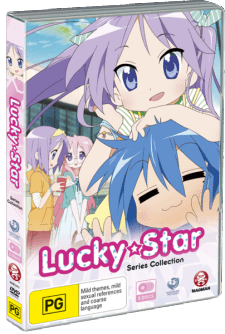 Another Madman Entertainment release for July 2012 that may appeal to some of you is the Lucky Star Series Collection which was originally released by Madman Entertainment for the Australian and New Zealand audiences all the way back in 2009 over two collections. While unfortunately they will not be including the OVA episode for the series, this collection will encompass all 24 episodes spanning 600 minutes over four discs.

When you think back to your high school days, can you really sum up those days in one concise paragraph? Memories of those times were probably made up of a series of hilarious moments with your closest classmates. That’s exactly what Lucky Star is all about. Meet Konata, a girl who’s too obsessed with anime and video games for her own good; Miyuki, the cute, bespectacled living example of moe with an encyclopedic knowledge of all subjects; Kagami, the always serious but shy straight-man to Konata’s constant teasing and pranks; and her younger fraternal twin sister, Tsukasa, a sweet and kind airhead. Follow their not-so-ordinary high school days as they try to answer every day questions like how to eat a chocolate cornet.

Having acquired both volumes, I did a review of the show last year (HERE), earning itself a satisfactory score of C+.