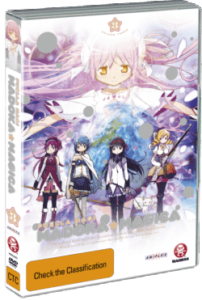 While it is pretty self-explanatory given that given past releases of series split up into volumes are usually released in the same or very similar increments, the third and final installment of Puella Magi Madoka Magica should be released in Australia during August 2012. The series features an English dub produced by Bang Zoom Entertainment and distributed by Aniplex of America in the US and Madman Entertainment in Australia and New Zealand.

As previously, this will be available in both DVD and Blu-ray forms. I recently did a review of the first recently released volume of the series which can be read HERE.

The end of a magical journey
“Has a loving family and best friends, laughs and cries from time to time…” Madoka Kaname, an eighth grader at Mitakihara middle school, lives such a life. One day, she has a very magical encounter. She doesn’t know if it’s by chance or by fate yet, but this meeting will change her destiny. This is the beginning of a new story of magical girls…