A Subtle Hint at Madman Entertainment Re-releasing Azumanga Daioh or Just An Error in Print? 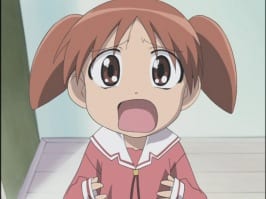 As I announced when I did my “Anime’s from the Past Review Series”, it seemed like Madman Entertainment had discontinued their release of this series late last year, with very few copies available on store shelves and their own website omitting the product listing for the show from their website. Interestingly enough, as I was going through this months anime releases (I have a fair few to get through!!), I found a trailer for the show included in the release of Hetalia Paint It White – The Movie.

NOW, this might just be and most probably is a mistaken inclusion (Or removal from the website doesn’t mean discontinuation like what they usually do)… but for those new to the anime scene and haven’t been able to find this title anywhere… it is a small hope to grasp hold of.

Been following the anime of Attack on Titan for the last few years and are eager to see how the tale of...
Read more
Anime

All Five Seasons of Yu-Gi-Oh! Streaming English Dubbed on AnimeLab

In the schoolyard during the early-2000s, there were two trading card games which ruled the roost. While some floated between the two...
Read more
Anime

Do you reside in North America, and are eager to hear which anime will be available for purchase in the month of...
Read more