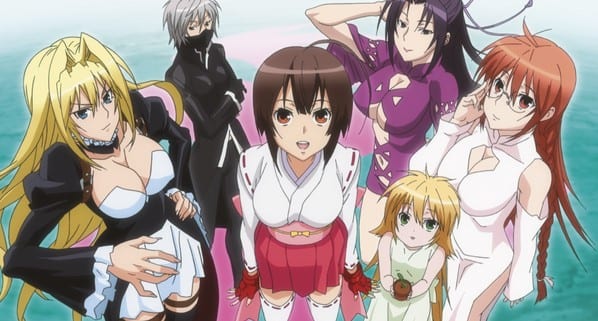 While most if not all the staff from Madman Entertainment are enjoying the last few days of their Christmas break, their website is hard at work pushing out the daily anime releases and as of this morning… the companies release slate for March 2012. There are a little over half a dozen series this time which will hopefully have something to appeal to everyone. The following is what has been announced for March 2012:

Bleach Collection 12 (Eps 168-179)
DVD | $49.95
Ichigo and Rukia take responsibility for looking after Rurichiyo, a girl of noble birth who one day appears in the World of the Living. She and her two bodyguards transfer into Ichigo’s class at school, and Rukia decides to show her how to have fun. The fun stops when Rurichiyo disappears and then a group of assassins arrives and challenges Ichigo and his friends to a fight!

Bleach the Movie 3 – Fade to Black
DVD & Blu-Ray | $24.95 / $29.95
A mysterious figure has broken into Mayuri Kurotsuchi’s laboratory in the Seireitei. Rukia witnesses this catastrophe, and the intruders abduct Rukia as she feels something inside of her fade away.
Meanwhile, in the World of the Living, Ichigo and Kon experience a strange disturbance and head to Kisuke Urahara’s shop for some answers. When Kisuke informs them about the destruction of the Seireitei, the two set out for the Soul Society.

What awaits Ichigo in the devastated Seireitei, however, are Soul Reapers who seem to have lost all memory related to both him and Rukia. Ichigo must find out what happened to Rukia and try to save her before the two are forced to part ways forever!

Heaven’s Lost Property Collection 1
DVD & Blu-ray | $59.95
Tomoki’s life was normal until a wish-granting angelic android named Ikaros fell from the sky and started calling him master! Of course, thanks to his raging teenage hormones, most of Tomoki’s wishes have something to do with panties. And that makes things pretty complicated, because one simple wish can lead to a rampaging robot made out of frilly undergarments or turn bloomers into bombs capable of blowing up entire neighborhoods!

If Tomoki doesn’t learn to control his impulses around Ikaros and be more careful with his wishes, the chaos will only get crazier. Luckily, even with such a dirty mind, Tomoki’s heart is in the right place. His hands, however, are a completely different story.

Hetalia World Series Season 3 Collection
DVD | $39.95
Italy, once home of the strongest empire in the world, has changed. This is the story of Italy, now a cowardly pasta-loving fool, and his friends (other personified countries of the world) as they live through strange moments in world history (This is a continuation of the first series).

Mardock Scramble – The First Compression Complete Edition
DVD | $29.95
To stop the unstoppable you need the irresistible. To kill the unkillable, you need someone for whom death no longer has a meaning. And to catch the perfect serial killer, you need the one person who knows his methods the best… his last victim!

Murdered and reborn, no longer human, the female cyborg Balot exists for only one reason: to track down the man who killed her and bring him to justice. But can even the ultimate hybrid between ghost and machine take down a monster who wipes his own memory… especially when his partner already has her in his sights? The future will be painted blood red as vengeance hit the streets!

Contains both the original theatrical release of Mardock Scramble: The First Compression as well as the director’s cut featuring five minutes of extended scenes and new footage.

Rosario + Vampire (Season 1) Collection
DVD | $59.95
Tsukune looks to be a typical high school student, but his grades are bad to the bone. Rejected by school after school, he finally gets accepted by an academy that’s more than a little out of his neighborhood. Unfortunately, it’s a school for monsters and Tsukune is the lone human! While forced to hide his secret, along comes a cute – but hungry – vampire girl named Moka. Beneath her cute and clumsy exterior, she too is not exactly as she seems…

Sekirei Pure Engagement (Season 2)
DVD & Blu-ray | $59.95
A clandestine organization known as the MBI has issued an edict that threatens to end the lives of Minato and his luscious companions once and for all! The cutthroat organization’s Sekirei Plan will force all busty brawlers and their masters to engage in a flesh-baring fight to the finish. Only one amazing pair will be left standing when this curvaceous cavalcade of carnage has come to a conclusion. Does Minato have what it takes to survive the bombastic barrage of breast-jiggling blows coming his way?