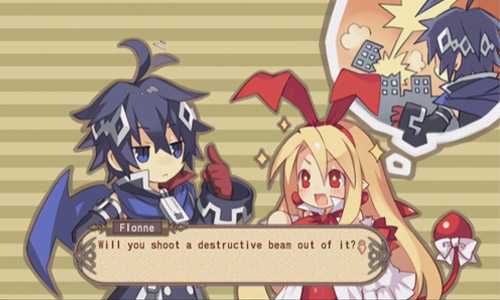 The bulk of the material is on Trinity Universe which is coming out next month. They seem to have ditched the sprite artwork entirely (Well that was obvious) and instead opted to go to full 3D character designs and retaining the visual novel style of interactions from most other games of theirs. Judging from the image above, the characters are definitely well designed and the backgrounds are really colourful and vibrant. They have also kept the cute more chibified artwork as seen in the top image, and I think Flonne’s otakuism is cute. Wonder if they have Flonnezilla in the game? As well, they unveiled some new shops within the game. First of which is the Managraphics system where you can imbed items such as sakura, sushi and numerous other items onto the blade via the catgirl Miyu which both has a graphical effect on the weapon and in battle, but also influences the strength of your weapon overall. This is an example of one of the managraphics used. Pamela’s umbrella, which i assume is her weapon has been imbedded with the power of the Ocean in this case. During the battle, when she attacks, water will be found gushing from the weapon every time she makes contact. Adds another layer of diversity to weapon design, something you don’t really see in games nowadays. Also got a few more battle images through. For a better description of the battle system, keep an eye out on the main website found here which should have information under Systems soon, considering it is the next system to be added on the list (They have descriptions of the Active Animation Adventure, Flow of Dungeon Exploration, Managraphics and Two Types of Encounters systems added to the list already). What I assume to be a dungeon map. Before you go turning your head saying “NO! Not FINAL FANTASY graphics, I dun wanna play”, you have to consider that this is one of the few Nippon Ichi games that have been in 3D, and in my opinion, it is a really colourful and creative design. It wouldnt suit anyone, but will most probably be good for any fan of Nippon Ichi games. The game will also (Judging from the main site) have a search system in place where you can use the search command to look for hunting grounds which are a great source of powerlevelling and materials. Much better than the system in Cross Edge by far.

Finally, for those that want to know more about Persona -Trinity Soul- and Toradora, both being dubbed into english by Nippon Ichi, they have released new images of the premium packages which you can get. No news for Australia however unfortunately. Persona – Trinity Soul – Premium Edition #1 which contains the first 13 episodes (??), art book and what i think is a fancy packaging box. Toradora Premium Edition #1 which contains episodes 1-13 as well as a premium box and special artbook/episode guide.

Off to bed now, getting late. Have a good night/day all!

Images recieved from NIS America. Any information given here was either gathered from the official websites of the company and game and/or my own deduction and opinion.