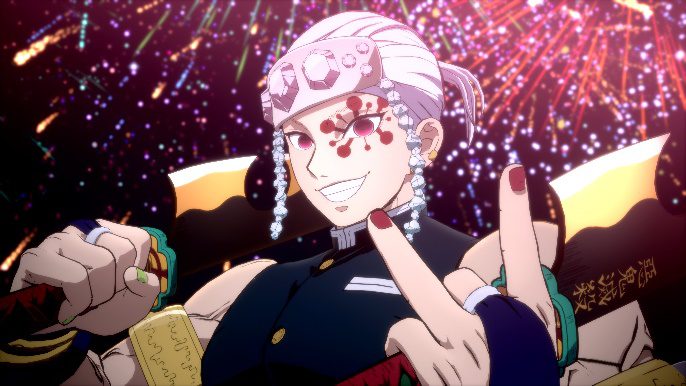 For those with the Demon Slayer -Kimetsu no Yaiba- The Hinokami Chronicles Character Pass, you will want to head to your chosen digital distribution platform and nab your next paid downloadable character – Tengen Uzui. The release of this DLC complements a major game update that adds the stage ‘Entertainment District’ for free, in addition to extending the availability of Kimetsu Academy Summer Uniform outfits onto non-Switch platforms.

Tengen Uzui is the Sound Hashira of the Demon Slayer Corps who uses Sound Breathing to defeat his foes. You can see him in action via the trailer by scrolling down a bit further.

The Demon Slayer -Kimetsu no Yaiba- The Hinokami Chronicles Character Pass is also now on sale. By picking up this bundle, players will be able to unlock and save on the full set of character packs that are scheduled to be released by the end of December 2022. Starting with today’s release, the paid content that will periodically be distributed over 5 separate releases include:

Keep in mind that depending on what platform you play on, you may require a PlayStation Plus, Xbox Gold or Nintendo Switch Online membership to play with these new characters in any online format.

Both the Character Pass and individual Tengen Uzui Character Pack can be purchased on the digital storefronts for Nintendo Switch, PlayStation 5, PlayStation 4, Xbox One, Xbox Series X|S, and Steam.