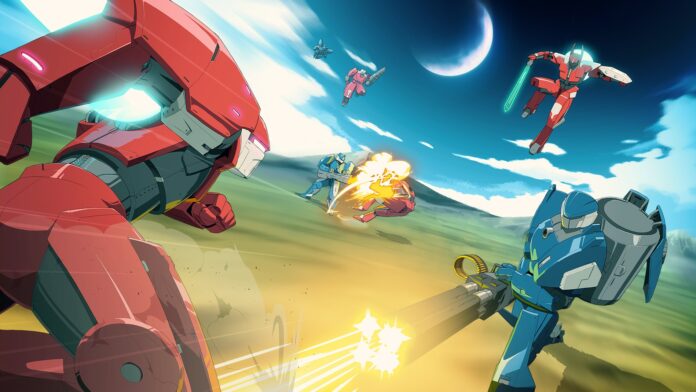 Following what has clearly been a positive enough reception for the formerly digital-exclusive game to receive a physical disc/cartridge release, PQube and developer Raredrop Games Ltd. has released their turn-based tactics mecha game WARBORN physically on the PlayStation 4 and Nintendo Switch.

Copies can now be purchased from select video game retailers, including Amazon in the United Kingdom, FNAC in France, GAME in Spain and Video Games Plus in the United States and Canada. If you are unable to pick up a physical edition, WARBORN is available digitally on the PlayStation 4, Nintendo Switch, Xbox One and PC.

In Warborn, players are tasked with assembling and commanding an army of elite units wearing technologically advanced suits of war, known as Variable Armour. Strategise from a top down view on various maps made up of different hexagonal terrain tiles, call the shots and watch the action unfold in dynamic mid-combat cutscenes!

Promoted features of Warborn include:

RISE UP
The Auros system is plagued by chaos, held tight in the deadly grip of conflict.  Find a side and deploy for battle in the Variable Armour, a technologically advanced suit of war. With command over this giant robotic weapon, lead a strike force of deadly mecha towards victory and liberation in turn-based tactical combat. The fate of billions rests in your hands.

COMMAND
Choose from four different commanders, each with their own unique Variable Armour, abilities and play style. Tactically place your units, clash with rival mecha, and watch the outcome in dramatic battle sequences inspired by 90s Japanese animation.

DEPLOY
Assemble a force to lead into battle by selecting from a range of mass-produced mecha units built for war. Use the differing strengths and abilities of each unit type to suit your command strategy, and call in reinforcements from orbit for extra support on the battlefield.

ADVANCE
Drop into the theatre of war and place your mecha in a combat field formed by different area tiles to occupy. Traverse and use varied environmental terrain to your advantage, or capture structures to gain additional resources and secure your supremacy on the battlefield.

BATTLE
Engage the enemy with tactical attack options, using giant weaponry to match the size of your Variable Armour. Inflict status effects, plant traps and support allies using unique unit skills. Once you’ve made your move, get ready to face the enemy in quick-fire turn-based bouts.

CAMPAIGN
Warborn takes place in another universe in a time of war and political uncertainty, where the line between right and wrong is drawn thin. Help liberate the Auros system from galactic tyranny, across a story-driven campaign featuring 10 missions dedicated to each of the four commanders.

SKIRMISH & MULTIPLAYER
Configure your own match parameters and develop new tactics in Skirmish mode. Or take the battle online to outwit rival commanders across the world in tense 1V1 battles.

MAP EDITOR
Create your own tactical map to battle on using the creative Map Editor. User-created maps are playable in Skirmish mode or via Online Private Multiplayer, and can be shared with friends or foes via a peer-to-peer sharing system.

In the ambitious crowdfunded sci-fi game Star Citizen, which has been in Alpha Testing...

The ability to race Final Fantasy mascot character - the Chocobo - has been...