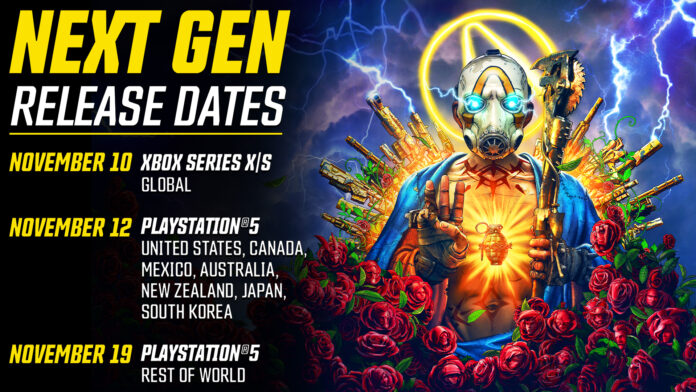 Take your mind forward to less than a month from now… you are now the proud owner of a launch day PlayStation 5 or Xbox Series X unit and you are now considering what game to play. Perhaps you don’t want to try out one of the many new launch titles, but instead want to dive straight into a classic from the last generation of consoles. If Borderlands 3 was your pick, would you be able to do this on launch day? 2K Games and Gearbox Entertainment has this week confirmed the answer is… yes! Their PlayStation 5 and Xbox Series X enhanced ports will be available day-and-date of the consoles rolling off store shelves.

The next-generation Xbox Series X and Xbox Series S version of Borderlands 3 will be available on 10 November 2020. For those looking to acquire the PlayStation 5 version, it will be made available on 12 November 2020 in the United States, Japan, Canada, Mexico, Australia, New Zealand and South Korea and from 19 November 2020 in the rest of the world. Already own a last-generation copy of the game? Provided it is on the same console family, you will be able to upgrade at no charge. Although if you have a disc copy of Borderlands 3 you will require a console variant with a disc drive and not the digital-only units.

This will not be a straight-forward port of the original Borderlands 3 however, and will include a few new additions to take full advantage of each console’s enhanced capabilities. The Xbox Series X and PS5 will display Borderlands 3 at 60 frames per second in 4K resolution during single-player and online co-op, and all next-gen consoles will support three- and four-player split-screen for local multiplayer. In addition, vertical split-screen for two-player local co-op will be available from the get-go on next-gen consoles and will also be added to the Xbox One and PlayStation 4 versions via a free update on November 10 and 12 respectively.