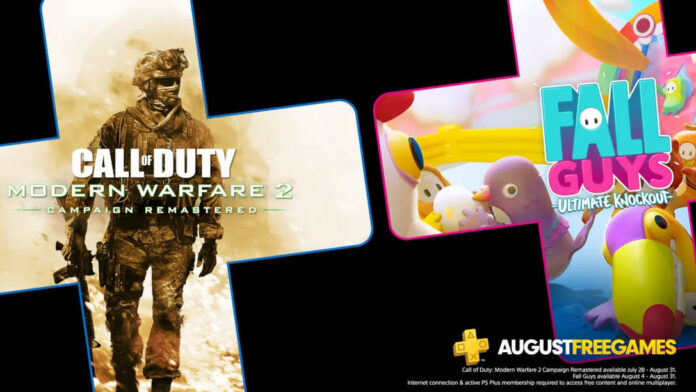 Following their 10th Anniversary of PlayStation Plus Line-up which received a cool to mixed reception from the gaming community, Sony Interactive Entertainment has today confirmed the two games to be available to active subscribers during the month of August 2020 – Mediatonic’s new obstacle racing game Fall Guys: Ultimate Knockout and Infinity Ward’s Call of Duty: Modern Warfare 2 Campaign Remastered.

PlayStation Plus comes with a number of other features outside the monthly games, including online play, deals on the PlayStation Store and 10GB of cloud storage for save files.

Survive a series of hilarious challenges until one victor remains in this colourful 60-person online multiplayer party game! Test your mettle in brutal free-for-alls or co-op challenges where only the winning team advances to the next round. Bend, bounce and bash your way through hilarious physics-based obstacles, from smashing through doors, to balancing on massive see-saws, to racing up mountains riddled with traps.

Following immediately on from the dramatic events of Call of Duty 4: Modern Warfare, Call of Duty Modern Warfare 2 Campaign Remastered immerses you in a gripping, action-driven adventure in which you must face off against a deadly new threat hellbent on bringing the world to the brink of collapse. The single-player campaign has been fully remastered with improved textures, animations, physically based rendering, high-dynamic range lighting and much more.

With a new expansion pack for Final Fantasy XIV having launched every two years, 2021 is...

Developer Digital Extremes are inviting all Warframe players (or "Tenno") on the PlayStation 5,...

From tomorrow, gamers will be able to experience the conclusion of IO Interactive's "World of Assassination Trilogy" with HITMAN 3 due to launch on the Windows PC, PlayStation 4, PlayStation 5, Xbox One and Xbox Series X|S.
Previous articleRegistrations for Virtual CrunchyRoll Expo 2020 Open, First Wave of Guests and Panels Announced
Next articleA Witch Chanting a Spell
Twitter Youtube
© The Otaku's Study