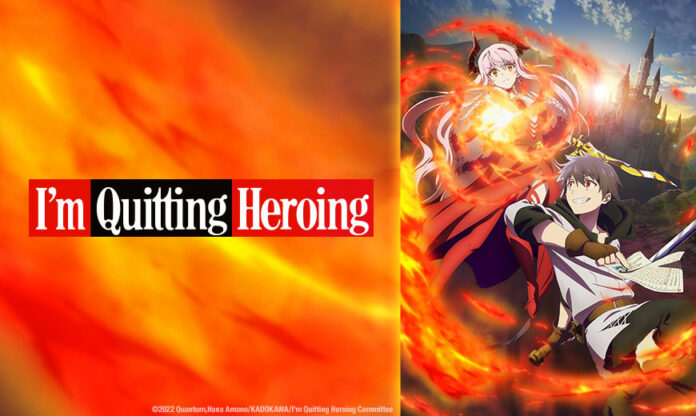 In yet another recent acquisition announcement by North American anime publisher Sentai, the licensor/publisher has confirmed they now hold exclusive rights to fantasy anime series I’m Quitting Heroing (勇者、辞めます) in a number of regions. Based on the original light novel works written by Quantum and illustrated by Hana Amano, the series is scheduled to begin airing on Japanese television in early-April 2022, closely followed by streaming on HIDIVE. Licensed territories it will be possible to stream the show in, include North America, Australia, New Zealand, the United Kingdom, Ireland, South Africa, the Netherlands, Scandinavia and Nordic Countries, Spain, Portugal, Central and South America, the Middle East and North Africa.

I’m Quitting Heroing is being produced by animation studio EMT Squared, with direction by Yu Nobuta and Hisashi Ishii, and composition by Shigeru Murakoshi.

In terms of Japanese voice acting, the show will star Kensho Ono (Tanaka-kun is Always Listless, Kuroko no Basket, Seraph of the End: Vampire Reign) as Leo Demonhart, Kaede Hondo (BOFURI: I Don’t Want to Get Hurt, so I’ll Max Out My Defense., Wandering Witch: The Journey of Elaina, Zombieland Saga) as Echidna, Shizuka Itoh (Hayate the Combat Butler, High School DxD, Jormungand) as Shutina, Hitomi Owada (The Demon Girl Next Door, SHIROBAKO, TONIKAWA: Over the Moon For You) as Lili, Yumi Uchiyama (Mushoku Tensei: Jobless Reincarnation, Re:ZERO -Starting Life in Another World-, March Comes In Like a Lion) as Mernes and Tetsu Inada (Kill la Kill, My Hero Academia, Tsubasa RESERVoir CHRoNiCLE: Spring Thunder Chronicle) as Edvard.

There is currently no word on whether Sentai will offer an English dub of the series, either during its streaming period or for its eventual home video release.

After saving humanity from the despicable Demon King, Leo Demonhart does not earn a hero’s standing. Instead, he is regarded with suspicion and hostility by those he fought to protect. Treated as a pariah with nowhere else to turn, exiled Leo seeks a position in the army of his former nemesis! But the army is not what it once was before its defeat at Leo’s hands, so to maintain his new position, Leo must whip the forces back into fighting shape.