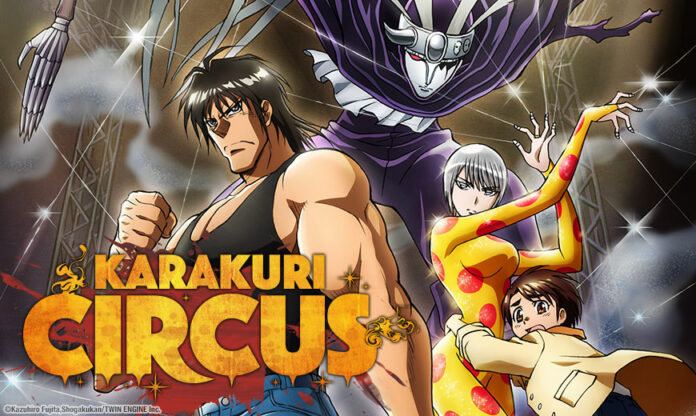 Bringing anime from years back to the forefront once more, North American anime publisher Sentai has confirmed a Spring 2021 home video release of Karakuri Circus, a 36-episode TV anime initially aired in 2018. In the statement by Sentai, they claim that this series “blends unique artwork, characters and storytelling with gripping action all set within a complex, enigmatic world”. This home video release will cover Blu-ray in addition to digital release.

Karakuri Circus is based on the original manga by Kazuhiro Fujita, with animation by Studio VOLN who has worked on other projects including I want to eat your pancreas and Ushio & Tora. Satoshi Nishimura (Trigun, Hajime no Ippo) directs the series while Kazuhiro Fujita (Ushio & Tora), the manga’s original creator, and Toshiki Inoue (Death Note, Sword Gai the Animation) provide series composition. The series stars newcomer Chihiro Ueda as Masaru Saiga, Megumi Hayashibara (Cowboy Bebop, Neon Genesis Evangelion) as Shirogane and Rikiya Koyama (Fate/stay night, Food Wars!) as Narumi Kato.

Karakuri Circus takes place after the death of protagonist Masaru Saiga’s father, who inherits the family fortune as well as his father’s company. Too bad he also inherited a target on his back since his unscrupulous relatives want to murder Masaru and take what’s rightfully his! The only thing standing between Masaru and assassination is a sickly clown named Narumi Kato, a white-haired girl name Shirogane who claims she’s Masaru’s guardian, and the mysterious puppet left to Masaru by his father upon his death.

Not only was Demon Slayer -Kimetsu no Yaiba- The Movie: Mugen Train the highest...

Have you been waiting to watch the newest episodes of My Hero Academia Season 5 with...

Joining a growing list of anime in the "Anime I didn't expect to see...

We are in the middle month of each season, so that means we can...
Previous articleDanMachi: Arrow of the Orion Film Streams on AnimeLab For Limited Time
Next articleChess the Musical’s Australian Cast Announced Ahead of Tour
Twitter Youtube
© The Otaku's Study