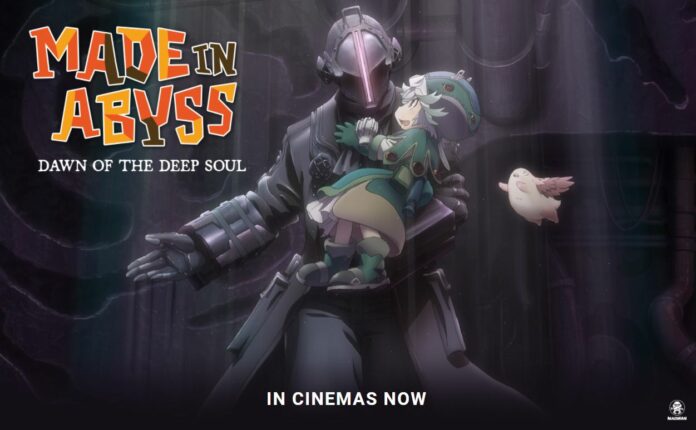 Found yourself, like many, craving to make your way to the cinema? Eager to fill your gob with delicious buttery popcorn, or perhaps a jumbo-sized beverage or sweet snack from the confectionary stand? If you have been holding out during the COVID-19 pandemic for something to encourage you to go, today’s offering from Madman Entertainment might be it! The Australian anime publisher has today commenced limited-time screenings of animated feature film Made in Abyss: Dawn of the Deep Soul, a continuation of the Made in Abyss TV anime.

Dawn of the Deep Soul continues the epic adventures of young explorers Riko and Reg, who are joined by their new friend Nanachi as they descend into the Abyss’ treacherous fifth layer, the Sea of Corpses. There they encounter the mysterious Bondrewd, a legendary White Whistle whose shadow looms over Nanachi’s troubled past. Although Bondrewd is ingratiatingly hospitable and the trio soon becomes fast friends with his gregarious daughter, Prushka, the brave adventurers know things are not always as they seem in the enigmatic Abyss…

The Australian cinematic screenings of Made in Abyss: Dawn of the Deep Soul will also feature all four episodes of Marulk’s Daily Life as a pre-show short.

Screenings will not be locked to one language option, with screenings of the film with the original Japanese audio available at a majority of locations, with a small number also offering the film with an English dub. Every state and territory with the exception of Victoria will have screening. You can find your nearest locations and times via the official Australian Made in Abyss: Dawn of the Deep Soul website.

After making their North American debut at Anime Expo 2022 earlier this month, CrunchyRoll...

Sure, through services like HIDIVE and CrunchyRoll, you can enjoy many of your favourite...
Previous articleMore Information Shared on Minecraft’s Steve and Alex Joining Super Smash Bros. Ultimate
Next article[Video] Sony Teardown a PlayStation 5, so You Don’t Have To!
Twitter Youtube
© The Otaku's Study
Go to mobile version