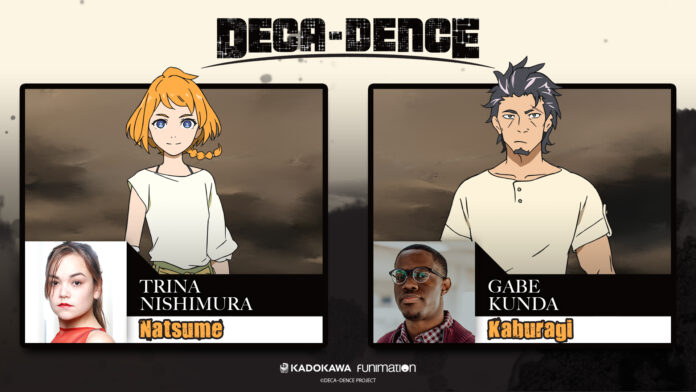 Ahead of the simuldub commencing for TV anime DECA-DENCE, anime publisher and localiser Funimation has confirmed who will be voicing the lead characters in their English dub, in addition to its lead creative team. Keep scrolling down to learn who is voicing whom.

Many years have passed since humanity was driven to the brink of extinction by the sudden emergence of the unknown life forms Gadoll. Those humans that survived now dwell in a 3000 meter-high mobile fortress Decadence built to protect themselves from the Gadoll threat.

Denizens of Decadence fall into two categories: Gears, warriors who fight the Gadoll daily, and Tankers, those without the skills to fight. One day, Natsume, a Tanker girl who dreams of becoming a Gear meets surly Kaburagi, an armor repairman of Decadence.

This chance meeting between the seemingly two opposites, the girl with a positive attitude who never gives up on her dreams and the realist who has given up on his, will eventually shake the future course of this world.

It has been thirty years since Square Enix (then known as Square) first released Seiken...

A few days ago, Australian anime publisher Madman Entertainment sent out a notification that...

Renew your Apple TV+ subscriptions and brace yourself for Season 2 of the animated musical series 'Central Park' due to commence exclusively via the Streaming service on 25 April 2021.

Based on the original manga by Aidalro, Toilet-Bound Hanako-Kun takes views into the mystery-filled Kamome Academy, where the rumoured "Seven Wonders" come to life, and where rumours have more truth to them than expected.
Previous articleSeven Seas Announce Wave of New Manga & Light Novel Acquisitions
Next articleThe Otaku’s Study Status Update – 30 August 2020
Twitter Youtube
© The Otaku's Study