Do You Prefer a Cafe of Catgirls or Doggirls? WanNyan ☆ à la mode Releases in English 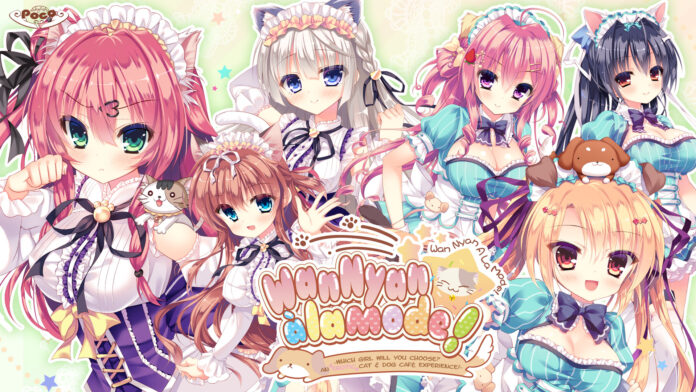 Your trip to the paradise of catgirls and doggirls awaits! The western visual novel localiser and publisher MangaGamer has released their English localised version of SkyFish’s visual novel WanNyan ☆ à la mode through their official online store. Priced at $39.95 USD, this is an 18+ visual novel following the tales of those work at rival cafe’s, and the one fortunate enough to serve as its manager.

Will you throw your bone in with the “Kitty Parlor” cafe full of cat-themed girls, or the “Beans Puppy” cafe full of dog-themed girls? Can you beat your rivals to create the very best cakes? Which cafe uniform variant will you go for? Those are the decisions you will have to torment yourself with while reading your way through this slice-of-life adventure.

PochiTama Pâtissier Academy – A prestigious institution that has sent countless pastry chefs, confectionery artists, and bakers out into the world. Admission to this establishment is easy, but graduating is a challenging feat!

Many branches exist within PochiTama’s global network, each having great influence within the culinary industry.

Our story begins when several of the academy’s most promising trainees are summoned to campus. They are to live in the on-site dormitories for several weeks for the duration of the special exam, in which they will manage an academy-owned shop all by themselves! Their efforts will be carefully appraised, and two of the highest performing trainees will earn the coveted title of “MVP.”

Those chosen as MVPs will be given the right to intern at any famous pâtisserie they choose in the world. In other words, this is a chance to set out and gain a foothold in the industry! Each trainee yearns for this chance and to put their heart and souls into managing their own shop.

The cat-eared girls manage the café “Kitty Parlor,” while the dog-eared girls attend to the “Beans Puppy” café.

Which shop will you choose, and who will you get along well with?!

Shinono currently lives in Paris and is a pâtissière-in-training at PochiTama’s France branch. She returns to Japan after being selected to participate in the exam, but becomes aloof when she learns that Kenta has forgotten all about their childhood promise. Contrary to her words, she’s quite happy at their reunion and always seems ecstatic to be around him.

She is an earnest girl who refines her skills by using love as her driving force!

Kenta’s upperclassman and acquaintance from his former academy’s student council.

They later became friends, and continue to maintain a relationship of that of an older sister and a younger brother. It wasn’t until recently that they started seeing each other as members of the opposite sex, but have yet to express those feelings outright.

Korone is an assertive and positive young woman, but can oftentimes come off as being too rough due to her go-getter attitude. She’s incredibly awkward when it comes to romance, and isn’t the type to bargain or compromise. Deep down, she’s a maiden at heart and will do nothing but blush and stutter when put into a compromising situation.

Hana specializes in western confections and is a student at PochiTama’s Kyoto branch.

At first glance, she’s a confident young woman who gives off a very strong-willed impression. Her family owns a popular western-styled pâtisserie. She and Makoto are childhood friends, who live across the street from one another.

To Hana’s dismay, Makoto’s skills as a pâtissière quickly surpassed her own. Seeing Makoto as her eternal rival, Hana works hard so her childhood friend will acknowledge her efforts.

A student at PochiTama’s Kyoto branch, where she specializes in western confections.

Makoto is a flexible, yet vigilant young woman who always observes each situation from an outside perspective before shifting into action. Her family owns a long-standing Japanese-style pâtisserie, Nekonoya, that’s famous enough to receive occasional media coverage.

Being familiar with the art of Japanese confectionery since childhood, Makoto’s breathtaking talent and ingenuity made her the top pâtissière at her family’s store. She enrolled at PochiTama to experiment with different types of confections and develop new recipes to improve upon existing Japanese sweets. Makoto currently works at a western-style pâtisserie where her seemingly endless potential seems to shine through.

A student and pâtissière-in-training at PochiTama’s Hakata-ku branch. Michiyo is a serious and earnest girl with a samurai-like disposition, one which never wavers after she’s made up her mind.

Her father once took her to a temple festival at a very young age, where she first encountered Amezaiku, or Japanese candy art, which is often made in the shape of animals or people. Enthralled by the delicate process, Michiyo stubbornly insisted that she, too, would someday create such intricate confections.

She works hard to create a confection that would entrance anyone who lays eyes on it, and toils day and night to further hone her skills as a pâtissière.

A student at PochiTama’s Sapporo branch, where she is a pâtissière-in-training. Hinana is a gentle young lady, who can be a bit of an airhead and oddball at times.

She loves eating above all else, and can usually be found munching on something. She believed choosing such a profession would mean she would always have a full belly. Hinana’s parents taught her how to cook at a very young age, and her skills as a pâtissière are that of a professional. After tasting a cake Kenta made, Hinana fell in love with the flavor and struggles day and night to replicate it.

She has an assertive and open-minded attitude when it comes to sex, and will partake in just about anything.