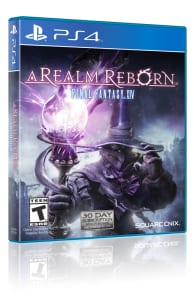 If you are a PC-player of Final Fantasy XIV: A Realm Reborn you can happily go about your time in-game knowing that improving the game experience may require nothing more than an upgrade to your computer. For PlayStation 3 gamers at this time it isn’t that easy, with no course of upgrading to the PlayStation 4…. YET.

Following their announcement in mid-2013 confirming their commitment to supporting Sony’s next generation console, Square Enix have today confirmed that Final Fantasy XIV: A Realm Reborn will be available for purchase on the PlayStation 4 from the 14th April 2014.

This release will be available in either a Standard Edition or Collector’s Edition with pre-orders for both starting January 27. Pre-orders for either edition will include two in-game items (Mog Cap & Cait Sith Doll minion) and the ability to participate in Early Access starting on April 11. The limited Collector’s Edition comes packaged with an art book, music CD, art cards, a themed security token, and several special in-game bonus items.

Upgrades for pre-existing players will be complementary starting the 11th April 2014. After transferring to the new console however, it will render the PlayStation 3 account / client unusable. Square Enix have confirmed that further details on this account transfer service will be available at a later date.