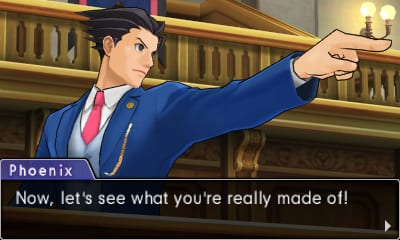 Australian publisher All Interactive Entertainment alongside Capcom have earlier today confirmed that Phoenix Wright: Ace Attorney – Dual Destinies will be available for purchase in Australia via the Nintendo eShop (3DS) on the 24th October 2013. While this release has been a long time coming for some fans, this will unfortunately only be a digital download title.

This release is also set to include the costume pack and additional episode, Turnabout Return. Information on this DLC content is set to be shared with the gaming public soon.

Courtroom hero Phoenix Wright returns. The much loved gameplay and features from previous titles in the series are for the first time in stunning 3D, bringing the trials to life and putting players directly in the heart of the action. Players will need to investigate crime scenes to uncover clues before heading to court and presenting evidence, challenge witnesses and unravel the truth behind each of the cases.  Joining Phoenix is young Attorney Apollo Justice and new Associate Attorney Athena Cykes, whose unique ability to psychoanalyse witnesses’ emotions introduces a brand new element to proceedings.