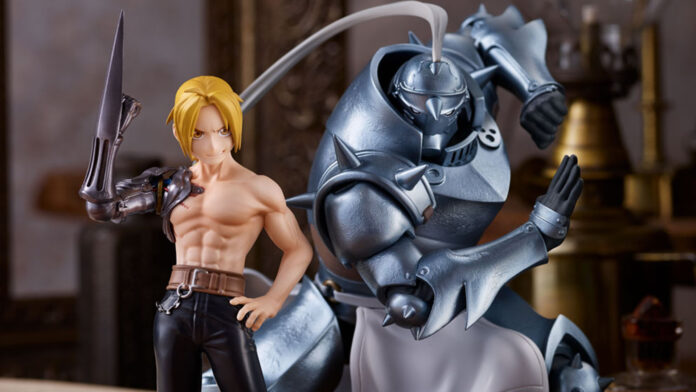 When you factor in exchange rates, import taxes, shipping costs and the cost of the item themselves, figure collecting can be an incredibly expensive hobby. Bucking this trend a little bit, Good Smile Company created the Pop Up Parade line of figures, which are designed to be “easy to collect” through affordable prices and releases which are available four months after pre-orders commence.

Two new figures in this line have recently commenced pre-orders, based on the Fullmetal Alchemist: Brotherhood anime/manga franchise. Both of these figures, details listed below, will be released at a price of 3,545 yen excluding tax in January 2021.

From the popular anime series “Fullmetal Alchemist: Brotherhood” comes a POP UP PARADE figure youngest State Alchemist in history, Edward Elric! Edward has been captured in a strong, brave pose and his Automail has been faithfully recreated in stunning detail. Be sure to add him to your collection along with POP UP PARADE Alphonse Elric!

From the popular anime series “Fullmetal Alchemist: Brotherhood” comes a POP UP PARADE figure of the boy with a body made of armor and a gentle heart, Alphonse Elric! The heavy look of Alphonse’s armored body has been carefully captured as he takes a strong martial arts pose. Be sure to add him to your collection along with POP UP PARADE Edward Elric!

Mona is part of Genshin Impact's permanent Wanderlust Invocation banner. This latest figure focuses on the eccentric Astrologist, depicting her striking a cute albeit (still SFW) revealing pose - taking advantage of her alignment with the hydro element and her ability to channel water through magical abilities.

Even collecting a small number of anime or video game figures can be a...

One of the biggest memes surrounding Genshin Impact's mascot character Paimon is that the Traveller (your...
Previous article
Immerse Yourself in Interstellar VR This October with AGOS: A Game of Space
Next article
Clannad and Clannad: After Story Commences Streaming on AnimeLab – With English Dub and Japanese Audio
Twitter Youtube
© The Otaku's Study