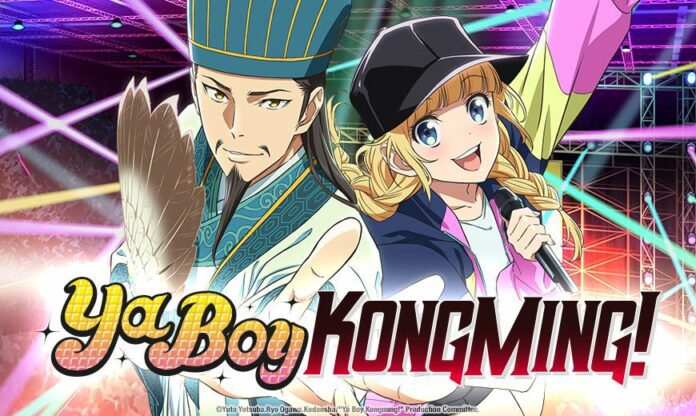 US-based anime localiser and publisher Sentai has confirmed they hold the exclusive worldwide rights (excluding Asia) to the anime adaptation of Yuto Yotsuba’s comedy manga, Paripi Kōmei (パリピ孔明), to be distributed under the localised title Ya Boy Kongming!. The manga is currently being distributed in the west by Kodansha USA. The series is scheduled to begin airing in Japan this April, with plans to offer it exclusively via the HIDIVE streaming service, with a home video release to be offered at a later date.

Ya Boy Kongming! is animated by P.A. Works, and features direction by Osamu Honma. The theme song is performed by 96neko (Flying Witch, Scum’s Wish, Heaven’s Design Team) while Genki Hikota (Hitorijime My Hero, YuriIII on Ice) provides the series’ music. Masahiro Murakami (Moribito: Guardian of the Spirit, Princess Mononoke, Ghost in the Shell: Stand Alone Complex) is in charge of special effects.

The series’ Japanese voice cast stars Kaede Hondo (Zombieland Saga, Wandering Witch: The Journey of Elaina, BOFURI: I Don’t Want to Get Hurt, so I’ll Max Out My Defense.) as Eiko Tsukimi and Ryotaro Okiayu (CLANNAD, Bleach, Fullmetal Alchemist: Brotherhood) as Kongming Zhuge. Sentai has not confirmed whether an English dub will be offered for a Boy Kongming! at a later date.

About Ya Boy Kongming!

Fate and reincarnation deliver brilliant military strategist, Kongming, from warring, ancient China to Japan’s modern party hot spot in Shibuya City, Tokyo. After a lifetime of battles and military skirmishes, Kongming wished with his last breath to be reborn in a world of peace and prosperity. It’s nearly two millennia later and he’s finding his way in a very different world than that of his past life. When he meets Eiko, an amateur musician with big dreams, the unlikely duo strikes up an even unlikelier friendship. Eiko has street smarts to help Kongming navigate this strange new world, and Kongming will use his strategic mind to help Eiko achieve stardom! The story is a clever take (and smart twist) on fish-out-of-water and person-out-of-time themes with out-of-this-world results for Ya Boy Kongming!