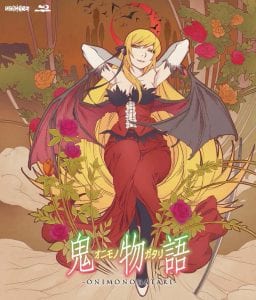 Looking forward to continuing your experience in the world of the Monogatari franchise? Aniplex of America have today confirmed via their New York Comic Con Panel that they will be launching a Blu-ray Set of Onimonogatari come December 30th 2014. This is the fourth arc of the Monogatari Series Second Season set of episodes, that will continue the tales of its memorable characters and events.

The Onimonogatari Blu-ray Set will feature all 4 “Shinobu Time” episodes across 2 Blu-ray discs, with a total runtime of approximately 105 minutes. The set will include the original Japanese audio as with previous volumes, and will feature a handful of on-disc and physical goodies – including package artwork produced by Akio Watanabe.

Currently the collection is listed at a SRP of $64.98, and will be available for purchase through online stores such as RightStuf.com from Monday.

After time traveling to the past with Shinobu Oshino, Koyomi Araragi meets Mayoi Hachikuji and returns her backpack which she left in Koyomi’s room. That is when they witness something unidentifiable – something that can only be expressed as the “darkness.”

Koyomi, instinctively feeling danger, sits Mayoi on his bicycle and attempts to escape, but the ever elusive “darkness” tries to swallow the two of them. They barely manage to escape with the help of the young shikigami girl, Yotsugi Ononoki, and they evacuate into the ruins of the cram school. There, Shinobu tells him that she encountered the “darkness” about 400 years ago. Then a woman named Izuko Gaen, who says she knows Meme Oshino, explains to them the nature of the “darkness.” And Koyomi has to face Mayoi’s tragic fate.